In the list of some of the oldest working techniques of the mankind, metal forging will be on the top! It paved way for the introduction of better methods of cultivation and crafts and trades development. Metal forging also led to the creation of weapons and devices in the olden eras.

In the previous article, “What is Steel Forging?” we saw an overview of what exactly is the forging of steel. Now, let’s dig into some history of forged steel and forged alloy!

Laying the Foundation of the Forging Process

Before the fire was put down to use for its various purposes, it was considered as a threat to humankind resulting into overpowering devastation. However, soon upon the realization of the reality, the fire was tamed to enjoy its benefits. The taming of fire set a base for the technical development in the cultural history!

Fire in the initial periods, as we all know, was utilized as a source of heat and light. It was utilized against the wild animals as a protecting shield. Additionally, it was used as a medium to prepare and cook food. But, that was not the end of the existence of fire! Soon the early humans discovered that the precious metals like gold, silver, and copper could be given a distinct shape with fire. Thus, evolved the craft of forging materials!

It all started with one of the biggest discovery of mankind: fire

The Beginning of the Forging Process

The art of the forging techniques dates to at least 4000 BC and earlier. The hot forging of metals all began in the land of Mesopotamia, between the Tigris and the Euphrates.

Bronze and iron went through the forging process by the early man to produce hand tools, weapons of war, and jewelry. However, the very first recorded metal, forged by fire and employed by humans was Gold. To shape the metal, rock was used as a forging hammer. Until the end of the 19th century, the precision forging of iron and steel continued. 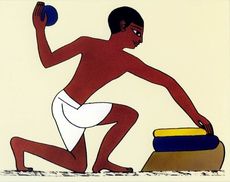 Open die forging of wrought iron was something the 19th century smiths were greatly proficient and skilled at. However, there was a catch!

The wrought iron could only be formed in great heat. Therefore, the forge-smiths became competent in hammer welding. The process of forging and hammer welding underwent by smiths resulted in huge shaft forgings weighing 10 tons and more.

Then came the great invention of the steam engine in the 19th century which the world witnessed! The invention introduced the human race to the modern forge engineering as we all know it!

The electrical power harnessed from the engine and the resultant explosive developments was all a boon for the industrial forge.

After the mid-19th century, the forging technology got in contact with an energy source of a hitherto unknown dimension. After the encounter, the forging industry was no longer dependent on the river locations. It developed powerful steam hammers and air hammers after that.

The late 19th and the early 20th century smiths incorporated hammers driven by transmission shafts. With the help of such hammers, they produced an assortment of forged parts mainly for the railway, car, and agricultural industry. 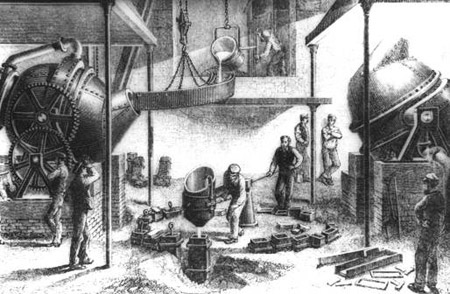 The further development of the Bessemer process as the invention of the basic steel making process was of great assistance to the forging industry.

Wondering how did that help the forge smiths? It meant cheaper supplies of iron ore containing high phosphorus and Sulphur levels could be smelted to produce high-quality steel.

The simultaneous development of the open-hearth steel making process toward the end of the 19th century was a success for the forging industry as well. The industry now had a reliable, low cost, high volume raw material.

Thus, began the journey of modern techniques in the forging industry in full power!

The second half of the 20th century saw improved productivity due to the growth of solid-state electrical induction heaters. The induction heating technique empowered greater throughput and enhanced dimensional control of the forged components.

The industrial revolution and the World War II also had a great impact on the forging industry and its techniques. It paved way for enhanced forging press equipment, forging processes, and forging machine.

Ironically, the war scene was of great assistance to the forging industry. It was in great demand to produce weapons.

The Modern Times of Forging

Representing a novel level of forging efficiency and control, today we have modern computer-controlled hydraulic and air hammers. The up-to-date machinery contributes to a successful progress in the forged products.

The forging industry skillfully produces a wide range of forged steel tools for use in the aerospace, automotive, mining, agriculture, and energy industries.

It was the desire to design adorning materials from precious metals that gave birth to the process of forging as an art form. Today, forging has become a worldwide famous industry significantly contributing to the development of the mankind!

The journey from the early age hammers to the present’s highly automated and computerized forging techniques is truly fascinating to watch!

If you want to have more information about the article or you want to share your opinion with us, contact us at .

• What is Steel Forging?

Let us find forgings for you today!

We are Steel Available, an online supplier relationship management and sourcing platform connecting suppliers and buyers from the heavy industry. We are developing the first ecosystem in the heavy industry, which allows clients to efficiently manage and automate their supply chains using web-based tools and services. Our goal is to reduce the hidden risk in value chains by providing the information that matters, from compliance to quality assurance, creating value for all stakeholders.

To get more information you can download our brochure.

This website uses cookies to improve your experience while you navigate through the website. Out of these cookies, the cookies that are categorized as necessary are stored on your browser as they are essential for the working of basic functionalities of the website. We also use third-party cookies that help us analyze and understand how you use this website. These cookies will be stored in your browser only with your consent. You also have the option to opt-out of these cookies. But opting out of some of these cookies may have an effect on your browsing experience.
Necessary Sempre abilitato
Necessary cookies are absolutely essential for the website to function properly. This category only includes cookies that ensures basic functionalities and security features of the website. These cookies do not store any personal information.
Non-necessary
Any cookies that may not be particularly necessary for the website to function and is used specifically to collect user personal data via analytics, ads, other embedded contents are termed as non-necessary cookies. It is mandatory to procure user consent prior to running these cookies on your website.
ACCETTA E SALVA